Bay Area indie-punk band Shutups have shared Endless Heaven, the lead single lifted from their new album, titled ‘I can’t eat nearly as much as I want to vomit’. The full album was mixed and mastered by Grammy nominated engineer / producer Jack Shirley (Deafheaven, Jeff Rosenstock, King Woman), and will be released via Kill Rock Stars on October 21st, 2022.

To accompany this new single, the band has released a Victorian era themed music video for Endless Heaven, complete with powdered wigs and makeup. You can watch the music video via YouTube below.

Clever music videos are something Shutups are known for (their hilarious green screen video for NSA (Corporate Holidays) being a great example), and this video for Endless Heaven continues on that trend; capturing the balance between their huge ambition with their tongue-in-cheek attitude and humor. The video was directed by Braith Miller, Jeremiah-Durian Williams, and Shutups band member Eric Stafford (guitars, synth).

Endless Heaven is a four and half minute crash course on the songwriting style of Shutups, who combine catchy indie punk melodies that share similarities with bands like Mannequin Pussy and PUP, filtered through the go-for-broke ambition of a band like Foxing and the experimental genre swirl of Spirit of The Beehive.  Describing his intentions behind the single Endless Heaven, the band’s songwriter and vocalist Hadley Davis says “I wanted to write a song that mirrored the feeling of letting out all your air and laying on the bottom of a pool. The crushing comfort of calm water. Every time I worked on this song, I pictured that. It’s a summer song, but for the more mundane moments of summer (sitting in hot cars, power outages, sunburns, days lost to the void). It’s about dissociating and returning mid sentence”. Meanwhile, bassist Bud Armienti said about the song – “I played the gong”. You can listen to the song below:

Beginning as a duo of Hadley Davis on vocals and guitar and Mia Wood on drums, Hadley recruited childhood friends Eric Stafford (Guitar/Synth) and Bud Armienti (bass / synth) from his hometown of Livermore to round out the full band roster. The influence of Weezer on Shutups is immediately apparent – something that Mia and Hadley bonded over early on in their friendship. Songs that contrast distorted guitar tones with disarmingly pleasant pop melodies are not exactly a reinvention of the wheel – in addition to Weezer, they cite bands like The Pixies as inspiration for their own take on the classic quiet-loud-quiet-loud 90s alt rock sound – but the way they assemble these songs is truly unique. “There’s also a good amount of inspiration pulled from mash-ups, as a compositional tool.” Hadley says. “I was and still am obsessed with Girl Talk’s Night Ripper. I worshiped that album in high school as it satisfied my need for non-stop hooks and changes. It also taught me the value of juxtaposition in texture. When I write now I’m thinking about cut and paste techniques more so than typical song structure. This album feels like a mashup of our songs.”

The forthcoming new Shutups album, ‘I can’t eat nearly as much as I want to vomit,’ is the follow-up to their 2019 debut album ‘Every Day I’m Less Zen,’ where the band honed their signature punk riffs and razor sharp hooks on more streamlined tracks like Smile, Jaywalk Over Me, and Yellowjacket. Since that release, the band have put out the ‘5,’ ‘Six,’ and ‘Seven’ EPs – which showed them expanding their genre influences and ambition with the help of engineer Jack Shirley, who gave their already tight sound an additional punch, clarity, and heaviness – without sanding down the edges of their punk thrash. 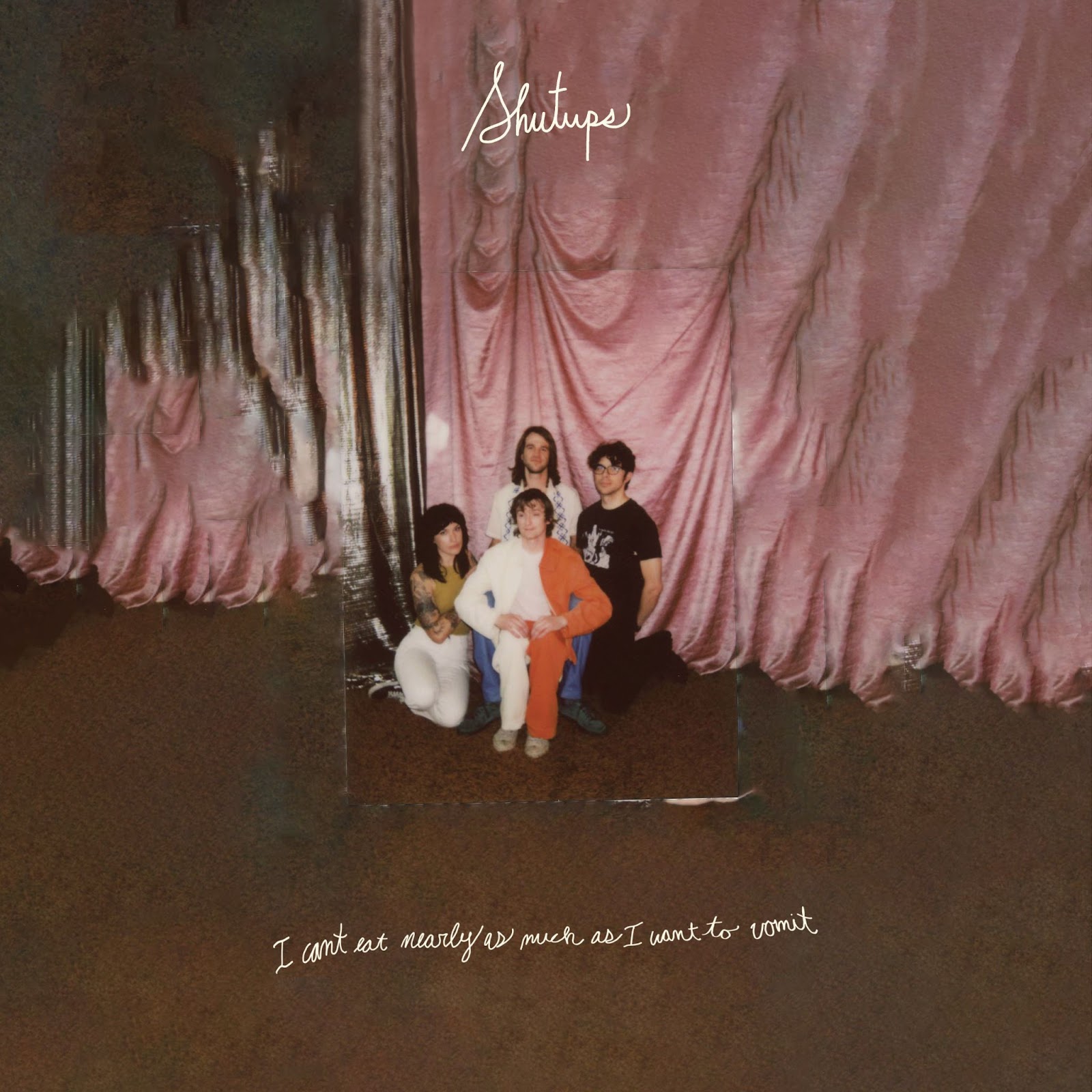 Shutups are a four-piece band of anti-establishment California indie punks with a vested interest in capitalism’s implosion, whose new album, ‘I can’t eat nearly as much as I want to vomit,’ presents a very human expression of reality in spite of what is, overwhelmingly, a bad time for humans––serving us a sort of seething, technicolor alternative sound that’s both intimate and infuriated. 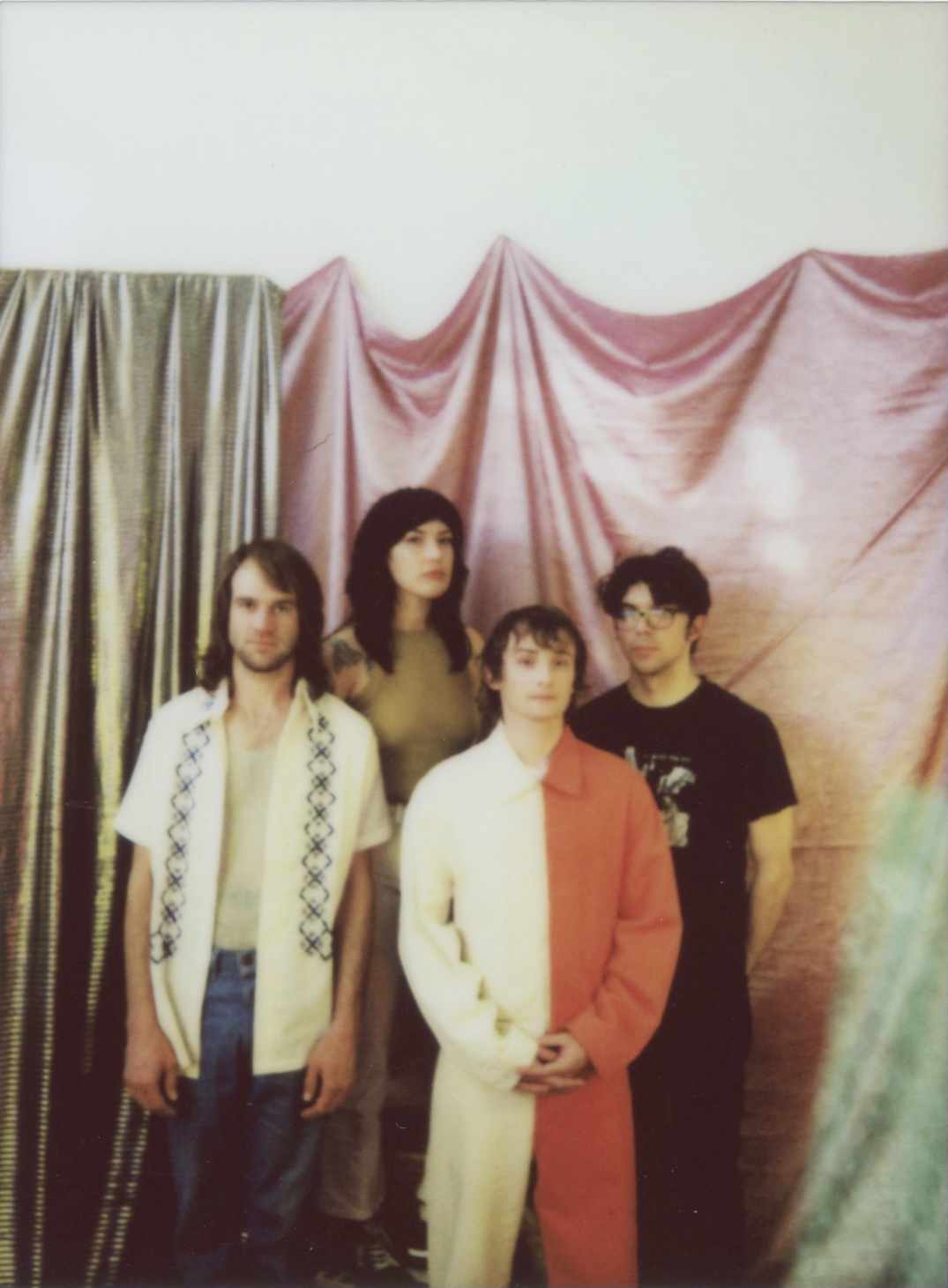 Band members Mia Wood (drums) and Hadley Davis (vocals, guitar, songwriting) met in 2012, finding that their different musical backgrounds either in or outside of formal training built the right environment for facilitating this duality. Later, alongside Eric Stafford (guitar, secondary vocals, synth) and Brandon “Bud” Armienti (bass, secondary vocals, synth), they’ve come to release an impressively varied body of work. EPs ‘5,’ ‘Six,’ and ‘Seven’, as well as LP ‘Every Day I’m Less Zen’ took on styles that varied from the compression of pandemic bedroom production to post isolation expansion and eventual DIY maximalism. Down to their self-produced music videos, their work is textured, layered, and unapologetically provocative.

The entire band besides drummer Mia Wood originate from Livermore, CA – the furthest suburb that can still be technically be counted as part of The Bay Area  – and you can feel the sneering resentment they have for the tech-bro vultures who have slowly taken over the bay in nearly every song the band releases, especially on tracks like Shit Opus from the ‘Seven’ EP. But the political undertones of their songs are never hamfisted or overly self-serious, always undercutting their most furious and pointed lyrics with an impish smirk and a wry sense of humor.

When asked about the meaning behind the album’s intentionally wordy title, Mia says that “I can’t eat nearly as much as I want  to vomit” refers to the moment, “When utter revulsion exceeds the basic survival need of sustenance. Go to the furthest limit of disgust and then take one step over the line, and this is what you get.” Having already decided on the album title when they initially began working on it before the pandemic, over the last few incredibly strange years its meaning warped and changed, particularly for Hadley. “It started out in reference to a general disgust in the world, but over time (compounded by the lockdown) the scope of disgust turned inward” he says, “It’s largely a collection of songs haunted by self-doubt and insecurities but also growth, fulfillment, and ultimately finding love for yourself. It’s all coated in a thick film of cynicism though, the embarrassment that comes with that personal growth, figuring out what does and doesn’t work, living with cringe. It’s the moment of sobering disgust you experience when you see yourself in a different light.”

‘I can’t eat nearly as much as I want to vomit’ will be released in full via Kill Rock Stars on October 21st, 2022